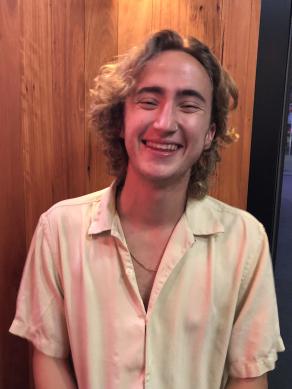 ‘Raised in an atheist family, Ruth was the first book of the bible I ever read! I found that to be an advantage because my impressions and interpretations were all my own. I could see the good: the unbreakable bond between Naomi and Ruth, their sisterhood, and the power of connection in turmoil. I could also see the bad: the socio-economic reliance on men and the subsequent lack of prospects for women without a man presented in the book. I felt like I’ve known a Naomi, known an Elimelech, and known a Ruth. Their stories are real today, and I tried to convey that in the essay.’

“Will Salkeld's essay simply titled Naomi recasts the biblical story of Ruth into a dystopian domestic context of today's world where the widowed Naomi struggles to relinquish the spectre of her recently deceased husband who is still controlling her emotions and daily life from the grave. Like its biblical counterpart in the Old Testament, Will's story is still one about brides, widows and daughters and their contested position within a patriarchy that deprives them of agency and power. However, he subverts the mythology inherent in this archetypal narrative and reveals the danger and harm of gender-based stereotypes that see the modern-day Naomi left penniless, homeless, and beholden to the charade of her late husband's double life. Will then resolves the problem by reuniting her with the women in her family who give her a home(land) and an emotional shelter, just like Ruth's loyalty towards her mother-in-law, Naomi in the Old Testament version.”

Lara said of the submissions:

“Five serious writers to watch in the future! Congratulations to all entrants- not only did you write meaningful and valued essays, you reminded us all of the power of the written and spoken word.”

Will is studying a Bachelor of Politics, Philosophy and Economics. He is a 2nd year resident, BRA Arts Rep, and Burgmann Academic Network Coordinator for the Arts. Will was recently elected to the role of BRA Vice-President for 2022. Congratulations Will, from your fellow residents and Burgmann College staff.