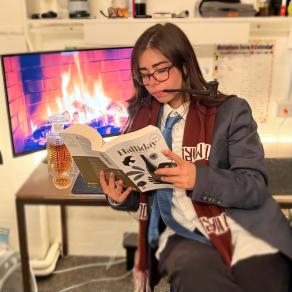 Asked about the inspiration and themes for her essay, Sophie explained:

'For the piece, I drew from my experiences spending time with family and suddenly being gripped by the quietly terrifying realisation that nothing lasts forever. I have felt this way since I was very small, but only thought to write about it after feeling directly attacked by the poem ‘We Have Not Long to Love’ by Tennessee Williams, and realising that I was not alone in this feeling, for there was a man in Mississippi in 1956 who also understood it. After that revelation, these themes were originally the subject of a screenplay I was writing; however, I adapted them for the competition.'

'The other pieces were all excellent. The entries included a poem with a Biblical theme; a reflection on leadership, and who makes an effective leader; a piece about immorality and conquest—which was eloquently and compellingly written; and, a story about the loss of a child, which was also moving and effective. The entries comprise an incredibly diverse and engaging selection of pieces which showcase the skills of Burgmann’s writers.'