The representation and celebration of First Nations arts and cultures is important at Burgmann College, as we seek to reflect the deep histories, diverse cultures and ongoing truths of Australia.

In 2020, the College established the First Nations Arts Initiative as a core element of our Reconciliation Action Plan. Our ambition was to purchase significant works of art which would become the inaugural acquisitions in a growing collection of works by Aboriginal and Torres Strait Islander artists.

With sincere gratitude to our donors, we are delighted to announce that we reached our fundraising goal of $23,500 in March 2021, enabling the College to purchase four remarkable works by First Nations artists, as detailed below. Living with, and celebrating these works by First Nations artists, and learning of the stories they tell, helps Burgmann College foster and maintain a respectful community of informed residents, staff and alumni. With the support of our donors we are embedding respect for the world’s longest surviving cultures and communities throughout our practices and programs. 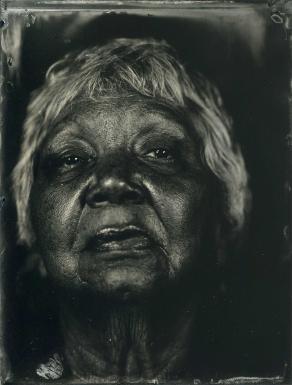 This exceptional photographic portrait of Ngambri Elder Dr Aunty Matilda House by the esteemed First Nations photographer Dr Brenda L Croft (Gurindji/Malngin/Mudburra Peoples; Anglo-Australian/Chinese/German/Irish heritage) was shortlisted in the 2020 National Photographic Portrait Prize at the National Portrait Gallery in Canberra. This portrait was later included in Know My Name: Australian Women Artists 1900 to Now (Part 1) at the National Gallery of Australia 14 November 2020-9 May 2021.

Aunty Matilda (b 1945) is a Ngambri woman who has dedicated her life to the pursuit of social justice for First Nations Peoples. A tireless supporter of the Aboriginal Tent Embassy since its founding in 1972, she helped establish the Aboriginal Legal Service in Queanbeyan in the 1980s and had a key role in establishing the Australian National University's Tjabal Indigenous Higher Education Centre in 1989.

On the eve of the National Apology to the Stolen Generations in February 2008, Aunty Matilda became the first person to perform the Welcome to Country at the opening of Federal Parliament. Her contribution to her community was recognised by the ANU with the conferral of the Degree of Doctor of the University in 2017.[1] 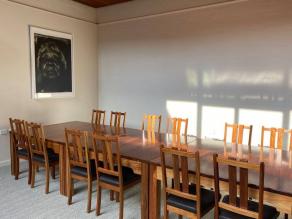 We are honoured and truly blessed to know Aunty Matilda as a friend of Burgmann College, as a traditional custodian of the land on which the College is situated. Aunty offers her care and support to our community and we are respectful of, and deeply grateful for, this connection and support.

Artist, curator, educator and researcher, Dr Brenda L Croft is Associate Professor, Indigenous Art History and Curatorship, Centre for Art History and Art Theory, College of Arts & Social Sciences, ANU. This portrait is from her series honouring the spirit of Cammeraygal woman Barangaroo (c 1750–1791), whose resilience and fiercely held connection to place inspires many contemporary First Nations women. Croft employed the wet plate collodion process for the series because, “It doesn’t hide anything.... It's not about making people look like something they're not. It’s about showing everything you've lived through, all that you’ve learnt”.[2]

We also purchased three important works from Maruku Arts in the Northern Territory. In 2019, Burgmann held a superb exhibition of works from Maruku in our recently refurbished AR Main Room. Three remarkable paintings remained in our custodianship, installed in this room, which is used by our residents for projects, exhibitions and general study. Maruku has been in operation for 35 years guided by an Anangu Board (read more about Maruku below). The details of the three paintings are as follows: 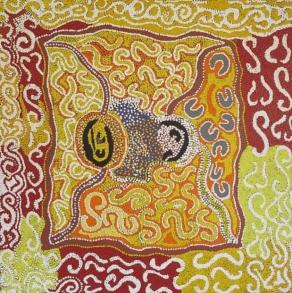 Betty West is minyma Yarnangu, a senior Aboriginal woman from the Western Desert area of Australia. She has spent most of her life in Warburton, helping it to grow from a mission settlement to the strong community it is today. A prolific traditional carver, painter and fibre artist with Tjanpi desert weavers, she is also a senior law woman and highly respected community member. Her skills have been passed on through the Tjukurpa, the Law and way of life governing her country.

This painting shows the Two Mythic Men (Wati Kutjarra) resting, gathering wild food and conducting ceremonies in country to the north of Warburton Ranges. The short curling shapes are natural features of the landscape, and the two men can be seen resting between their respective bough shelters. 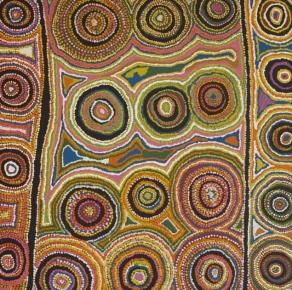 Christine West is minyma Yarnangu, a senior Ngaanyatjarra speaking Aboriginal woman. Born in the country halfway between Alice Springs and Kalgoorlie, she has spent most of her life based in Warburton Community. As well as being a long-time traditional wood carver she is gaining renown as a painter, and also works with the Tjanpi Desert Weavers. Christine is a respected senior law woman and community member whose skills have been passed on through the Tjukurpa, the Law and way of life governing her country.

This painting shows mangurri (headrings) made by the Minyma Kutjarra (Two Mythic Women), which they left scattered around the country as they travelled across the Western Desert to the Southeast of Warburton Ranges. The concentric circles show both the headrings traditionally used by Aboriginal women as a means to carry things, and sacred sites important to the Two Women’s sacred songline. 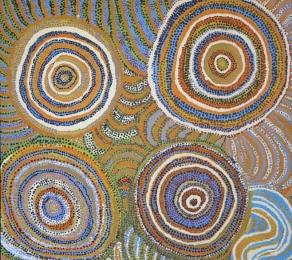 Nola Hunt is minyma Yarnangu, a senior Ngaanyatjarra woman from the Western desert community of Warburton. A long time traditional carver, she is also an exhibited painter with the Warburton Arts project. Her skills have been passed on by her grandmothers through the Tjukurrpa, the Law and way of life governing her country.

This painting shows sacred holes to the north of Warburton Ranges in the artist’s father’s country, called Kunnapurrul, Mamine, Wintjurru and Kulpalytjarra. They are on the sacred songline of the Two Mythic Men, the Wali Kutjarra, as they travelled across country, creating the natural features of the landscape, giving sacred Law and ceremonies for the ongoing spiritual maintenance of desert life. Curved lines show sandhills covered with vegetation and the circles show the water places.

With thanks to the generous support of our donors, we are thrilled to add these important works to the College’s growing collection of works by First Nations artists. We look forward to hosting an exhibition of works from Maruku Arts in the AR Main Room in the near future.

You can help support First Nations artists and continue building the College’s collection by making an online donation. For more information, email giving@burgmann.anu.edu.au

Maruku Arts is an Aboriginal-owned social enterprise, a not-for-profit artists’ collective based at Uluru, Northern Territory, Australia. Unlike many Indigenous art communities, they do not receive recurrent funding from Government. Their charter is to preserve, protect and promote the traditional Culture practiced by the Anangu people who live in Central Australia, and to alleviate poverty through art and cultural education.

Maruku represents over 500 First Nations artists and tour guides from 20 remote communities across the NPY Lands in the Northern Territory, South Australia and Western Australia. Maruku was hard hit by the COVID-19 Pandemic in 2020, and managed to survive through the generous support of donors.  You can support Maruku by making a tax-deductible donation to their to online fundraising appeal or by supporting their business through their online shop.