It is with great pleasure we announce the recipients of the 2022 Burgmann College Alumni Awards.

These awards recognise, encourage and celebrate alumni excellence across a broad range of criteria, for endeavours both inside and outside the College community, and at different levels of accomplishment and life stages. The awards also recognise our outstanding volunteers and staff for their commitment and contribution to the Burgmann community. Our Honorary Fellowship Awards remain the pinnacle of our community’s recognition. 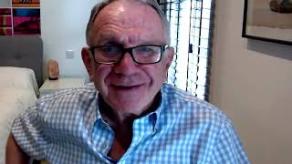 “When opportunities arise, seize them with both hands”

John Dauth’s award recognises his leadership and outstanding contribution to public service and diplomacy, alongside his consistent commitment and long association with Burgmann College.

“Burgmann as they say, is in my blood. It really helped me recover my life, it helped me find direction, find a bit of joy.”

John Dauth’s association with Burgmann College began in 1972 when he worked as a Residential Tutor. He has maintained his connection strongly over the years as Benefactor and Council Member.

In 1969, John joined the Department of External Affairs, and was seconded to Buckingham Palace between 1977 and 1980, serving in the Press Office of the Royal Household as Assistant Press Secretary to Queen Elizabeth II and Press Secretary to the Prince of Wales.

John continues to serve in the voluntary positions of Vice Chair of the Board of trustees of the British Red Cross and as a trustee of the London Committee for Australian Opera Awards.

John was recognised as a Lieutenant of the Royal Victorian Order (LVO), for service as Australian Press Secretary to the Queen, and as an Officer of the Order of Australia (AO), for distinguished service to international relations through the advancement of Australia's diplomatic, trade and cultural relationships, particularly with the United Kingdom and New Zealand, and through contributions to the United Nations. 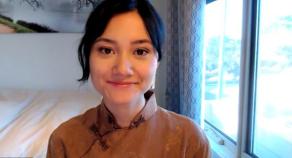 “If you have the means to attend Burgmann, you have opportunities others can only dream of. I believe that we need to create the opportunities to change the structure and use our voice to open the door for others who are not usually heard.”

Yasmin Poole is a gender equity advocate, working to advance social justice for diverse women in Australia. Yasmin is a Rhodes Scholar for 2022 (Australia-at-Large) where she will study intersectional public policy, focusing on how policy can better support low- income women of colour in Australia. Yasmin is a consultant at the World Bank Pacific, recently working in Fiji to support World Bank efforts to improve employment for women in rural areas. In Australia, Yasmin is Plan International’s National Ambassador. Yasmin helped to create the We Can Lead report, a major campaign lobbying for a safer Parliament through gender and cultural diversity quotas and institutional reporting mechanisms for survivors. Yasmin was also involved in the Safety, Equity and Respect campaign, standing alongside Grace Tame, Brittany Higgins, Wendy McCarthy and other formidable women on International Women's Day to call for gender equity and justice for survivors.

For her advocacy, Yasmin was recognised with the 2021 Youth Influencer of the Year award by the Martin Luther King Jr Center, chosen by Bernice King, daughter of Dr King.

In 2022, Yasmin was the youngest ever host of ABC's Compass for the episode 'Raising Her Voice' covering the rise of female independents in the lead up to the federal election. Yasmin has spoken on televised programs such as Q+A, The Project and The Drum, and has written op-eds for The Age, Sydney Morning Herald and Women's Agenda covering issues from how women in the Pacific are being affected by climate change to the toxic boys’ club in Parliament. 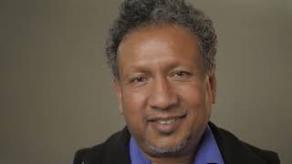 “The connection between the College and myself and the university is something that allows me to bring much more to the classes that I teach, to the research that I do, and to the other staff at the university with whom I interact.”

Since becoming a Residential Fellow in 2019, Professor Asmi Wood has contributed extensively to the education, support and personal development of Burgmann residents.

Asmi’s contribution at Burgmann is defined by his eagerness to be involved in the community and his willingness to volunteer his time to College events. Asmi has run law tutorials for Burgmann students, and provides insightful presentations to the College including the 2021 Annual Reconciliation Lecture. Furthermore, Asmi actively contributes to the College’s Reconciliation Action Plan, and has more broadly had an astounding impact on Indigenous participation in Higher Education at the ANU.

Asmi’s nominator noted that: “Although Asmi is incredibly accomplished and has actively contributed to Burgmann in formal contexts, his most profound impact is the relationships he has formed with students at Burgmann College. Asmi actively volunteers his time to provide mentorship, advice and support to all residents at Burgmann. His approachable, wise and caring nature enables students to approach Asmi for this support. Whilst I resided at Burgmann, I recall Asmi being actively engaged in conversations in the Dining Hall, providing opinions that were insightful, articulate and considered. Asmi’s presence has a significant impact on the culture at Burgmann and was a significant part of assisting in my personal and educational development whilst at the College.

Asmi does not seek recognition or praise for his contributions and his humility is something I find inspiring. This award is the perfect opportunity for Burgmann to recognise and celebrate Asmi’s contributions.” 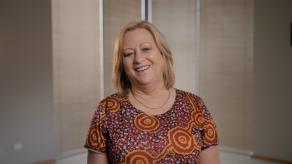 “Family means so much to me and I find the Burgmann staff and the wider community an extension to my own family. I'm accepting this award on behalf of all the staff. Make yourself proud, enjoy your time at college, and support each other.”

A Burgmann College staff member for over 25 years, Vicki sees many things that others do not, and is insightful in her perception of others and their situations. Vicki works hard behind the scenes and is very in touch with the needs of others. This goes for staff as well as many residents who may not even be aware that she has helped them financially by organising assistance.

When describing Vicki’s attributes, her nominator said, “I have fond memories of Vicki suggesting that we all go and help paint some of the residents’ rooms one summer. So, off we all went, as she said, you lead by example. There is never a job that Vicki will not take on, and Burgmann College is a better place because of her.

Vicki is one of the most loyal people I know. Her love for Burgmann and all it represents is second to none; she goes above and beyond time and time again.

Many years ago, Vicki instigated our daily staff morning tea which includes every department, ensuring there has never been any hierarchy between our staff teams. This morning tea still happens today and is such an integral part of the Burgmann staff team.”

CONGRATULATIONS!
Our sincere congratulations to all the recipients of our 2022 Alumni Awards!

Click here to view the congratulations message from College Leadership and President of the BCAA.