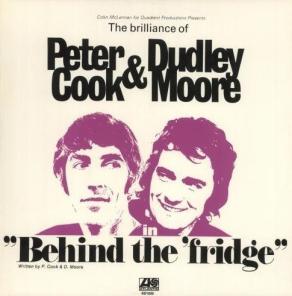 Every generation of Burgmann residents knows and loves Burg Day. The annual celebration honouring St Beryl with a breakfast of pancakes and Baileys (in former times, chicken and champagne), along with St Beryl’s blessing of the brick and the rambunctious Brick Race that follows, have been cherished traditions since Burgmann’s beginnings in 1971. But do you know how they started?

Patron saints are typically chosen because they have some connection to a particular region, profession or family. St Beryl is no exception, though her adoption by Burgmann is somewhat was less orthodox and may or may not be rooted in the legendary episode of a spring day in the College’s first year.

On the morning of 13 September 1971, an organising party of three Burgmann residents persuaded their fellows to descend upon Canberra Airport, with the hopes of intercepting comedic legends Peter Cook and Dudley Moore. 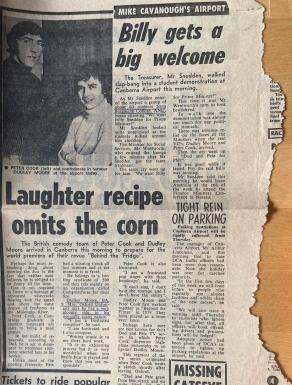 By the start of the 1970s, ‘Pete and Dud’ had become the hottest comedy duo in the world, lauded for their irreverent, ground-breaking humour. The Oxbridge graduates were arriving in Canberra to prepare for the world premiere of their revue Behind the Fridge, following on the heels of their enormously successful 1960s stage hit, Beyond the Fringe. And at Burgmann College, they had a loyal following.

“We were all a bit mad on Dudley Moore and Peter Cook and we knew they were coming to Canberra to rehearse their show. We made banners saying, ‘Welcome Pete and Dud’ and about 20 of us went to the airport to welcome them to Canberra. Peter Garrett was also there.”

“We invited ourselves to their press conference at a motel nearby, and then invited them to come to dinner at Burgmann,” Colin says. “And surprise, surprise, they said yes!”

Liz thinks it may have been the first anniversary celebration of Burgmann College, but definitely a festive occasion. Then Master Professor David Griffin (1971-1975) rolled out the red carpet for the celebrities, hosting a small reception for them in the anteroom of the Dining Hall before welcoming them to dinner with the residents.

“They were fantastic. They stayed all night and watched all our performances and revues,” says Liz, who had the honour of sitting next to Moore for the evening. 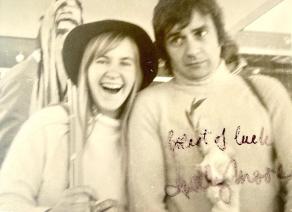 The duo made their own contribution to the festivities, with Moore playing the piano and singing and Cook telling jokes.

“I remember thinking what a great night,” Colin says. “They were wonderful guests, and it was a great experience.”

Liz took away a lasting memento and evidence of the surreal adventure with a photo of her and Moore, which he signed with characteristic cheekiness, “Breast of luck, Dudley Moore”.

No-one can recall exactly whether St Beryl’s connection with Burgmann began before or after the events of this day, but there is no doubt it was inspired by the fervent admiration for Cook and Moore within Burgmann’s corridors, and chiefly their skit on the Order of St Beryl and the Leaping Nuns.

The residents of Burgmann made St Beryl their own by attributing protective status to the matriarch, who has been represented every Burg Day for more than 50 years by a nominated resident.

Burgmann Day celebrates the occasion when for the first time everyone at together in the College dining room. It is the day when residents pay their divine ‘protection money’ to the College deity, St Beryl.

It was in the very early days of 1971 that the divine influence was first noticed and it was obvious that we had been taken under the armpit of a very special deity. College annals speak of the miraculous, and frequent, descent of bricks from the heavens, or at least the top floor of Homer.

Our predecessors were wise men, indeed (not always so in thought), and so awestruck were they by this manifestation that they at once pledged submission to St Beryl, and promised annual homage for the remission of their sins, with the rider that they could then sin again, because homaging was such a satisfying business. St Beryl on receiving this assurance immediately caused the fall of bricks to cease, and just in case that residents might forget and creeping revisionism make its appearance, reminded all and sundry that it was only her ability to take unto herself all the excess moisture which pervades our site, that prevents our dear College from sliding slowly but irretrievably into Sully’s Creek.

And thus we have gone on making our annual payment…

We are delighted to report that St Beryl continues to grace the residents of Burgmann College with her presence every year on Burg Day, and to bestow her benevolence through the blessing of the brick.

If you have memories and/or photographs of Burg Day and St Beryl (or more recollections of the events of 13 September 1971) you would like to share, please email alumni@burgmann.anu.edu.au