Tiana Smerdon is the 2022 recipient of the Burgmann Price Scholarship. She grew up in Albury, a regional town located on the border of NSW and VIC. Tiana has a keen understanding of and appreciation for the multifaceted benefits of scholarships which by supporting individuals have the power to inspire future community level contributions and change. 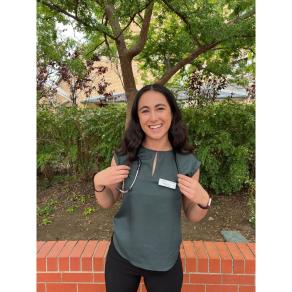 Shortly after finishing Year 12, Tiana was offered the enriching opportunity to shadow a paediatrician with the Albury-Wodonga Paediatric Group. She graduated from the ANU with a Bachelor of Health Science at the end of 2020 and is now completing her first year studying a postgraduate Doctor of Medicine and Surgery.

Tiana is passionate about children’s health and is acutely interested in pursuing a specialisation in paediatrics. She also aspires to work in rural communities in the future; hoping to help reduce the inequitable distribution of healthcare access and resources which currently exists between metropolitan and rural/remote settings across Australia.

In Tiana’s words, the impact of receiving the Burgmann Price Scholarship is ‘unmatched’. She notes that for many students from similar socio-economic backgrounds as her own, financial barriers often pose a massive challenge when it comes to studying interstate. Without the support of the Burgmann Price Scholarship, Tiana would not be able to afford to live at Burgmann College.

With a full-time study load and casual job, the support from her Scholarship makes a big difference in Tiana’s world and what she can achieve, in terms of both her academic and extracurricular commitments. She offers a ‘enormous thank you!’ to the donors of the Burgmann Price Scholarship who have played a pivotal role in helping to alleviate some of Tiana’s financial stresses and hopes that they are aware of the invaluable impact that their generosity has had on her ability to prioritise her studies and mental wellbeing as a medical student.

Inspired by the assistance she has received, a future goal of Tiana’s is to not only give back by serving as a doctor in rural communities; but to also one day support promising but financially challenged university students, who are keen to make a difference to Australia’s healthcare system, by establishing a scholarship of her own.